From our Namibia quarry to your kitchen

Here at Stone World, we have access to highly unique granite that comes directly from our family quarry in Africa. This granite is exclusive to Stone World, and while it comes with all the same advantages and perks of typical granite, it is also truly one of a kind.

This granite, like all granite before it, comes together after being forged by heat and pressure. The end result is a spectacular granite from Africa that is both gorgeous and exotic. 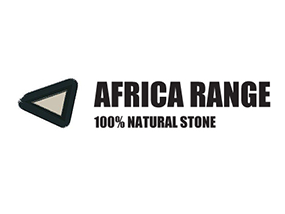 We import our Africa Range Granite from Namibia, where our team spends significant time inspecting and excavating granite to ensure that it is of the highest quality. We cut our granite in Namibia with diamond wire saws, allowing extreme precision and creating a truly beautiful outcome.

We stock our granite in the quarry in Namibia to ensure enough product is always readily available to be shipped anywhere in the world. After extracting it from the earth, our team takes the granite to be further cut, polished, and sealed using state of the art equipment.

Our first priority is the quality of granite for our customers, and we work to ensure that on every step of the way — whether it’s cutting the granite or polishing it to bring forth the vivid colors of the African landscape. You’ll notice that many of our granite selections are named for aspects of African nature as well, because we work hard to bring forth the natural beauty and quality of this one of a kind granite. From our quarry to your countertop, we bring global luxury to you.

Easy tips to take care of your granite

One of the biggest benefits of granite is that it doesn’t require much extensive care and maintenance in order to remain illustrious and durable. However, there are some simple precautions and steps to take to make sure the granite in your home or business is looking good and lasting as long as it possibly can. 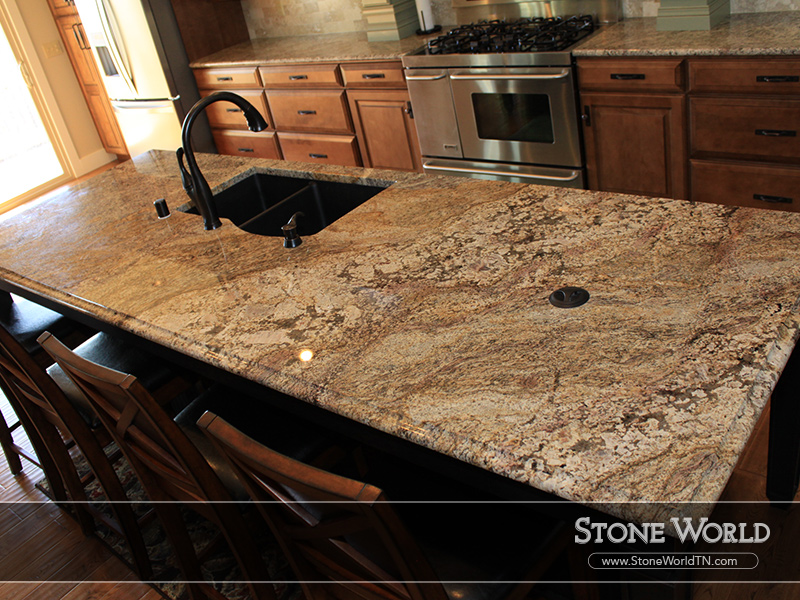 First, one of the most commonly suggested maintenance tips for granite it to use an “impregnator” to seal the top, which helps protect the stone from staining and unwanted moisture. Depending on the granite, its use and how well you seal it, how long the seal lasts can certainly vary. Some homeowners refurbish their seal once every few years, however new sealant technology suggests that many granite sealers can last as long as fifteen years. Not bad!

An easy way to test to make sure the seal is appropriately working is to drop a bit of water on there; if it beads up, the seal is in tact and working properly. If not, you can add another coat of the sealer.

As far as cleaning granite goes, you’ll want to avoid acid-based cleaners (as with most natural stone products). So, looking for something neutral to wipe down your countertops with will work best. It’s pretty tough to stain granite (especially granite with a sealer on it), but it’s smart not to let any solid or liquid sit out on granite for long periods of time in order to avoid staining.

Overall, care and maintenance For granite is relatively simple and easy to do. But, the better you take care of the granite in your home, the longer it will last and the better it will look.

Click here to read more about granite countertops in Nashville

It’s easy to assume that granite is only used for a few things, and most people associate granite with kitchen countertops. While this is certainly granite’s most popular form, granite can provide its same long-lasting and naturally gorgeous qualities to lots of other spaces. 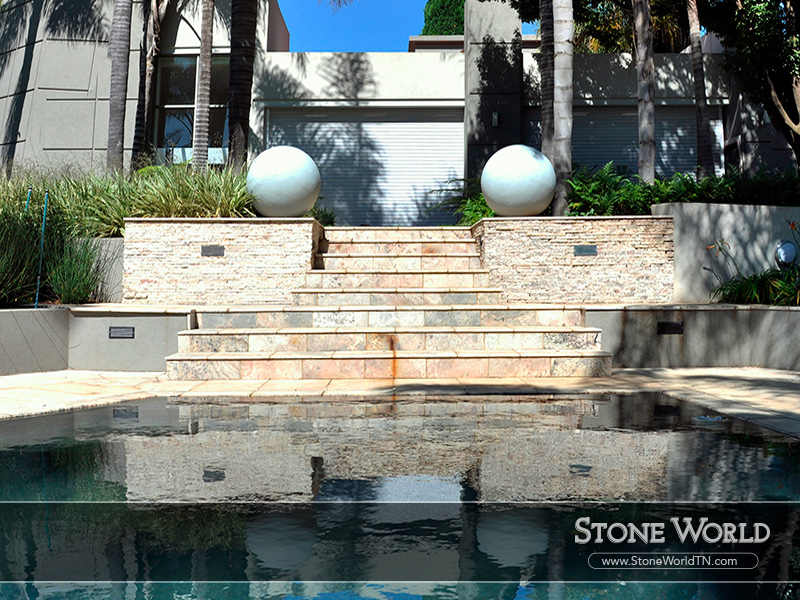 If your porch is in need of a completely new look, granite pillars are a stunning option for turning an older porch into a brand new place to show off the style and look of a house.

Similar to pillars, a granite post can bring a lot of life to a simple part of the home or yard—like a mailbox or a lamp. Plus, because granite is incredibly strong and durable, it’s a great option for a light, a mailbox, or something else that may be outside and susceptible to weather and other forces of nature.

The idea of a completely granite fence might sound excessive, but using granite posts as a part of the fence— maybe even the pillars of the main gate—is a great and unique way to use this natural stone.

Granite works well as a flooring material just as it works well for countertops and tabletops—utilizing it as a durable tile surface in a bathroom or laundry room can work beautifully and be quite functional as well.

This is a great way to use granite to showcase an aspect of your home that hasn’t been noticed before. Plus, since granite conducts heat well and can withstand it, it’s the perfect material for fireplaces. The unique uses for granite are limitless.

The right cut for you

When choosing the right granite for your home, there’s also typically a second aspect of the granite that you’ll have to consider, and that’s the variety of granite edge profiles. This may seem like a small decision after landing on the type of countertop you’d like, but it is a decision that can affect things like cleaning, upgrades and even the safety of those in your home (especially children). Below you’ll find a few of the common cuts for granite edges. 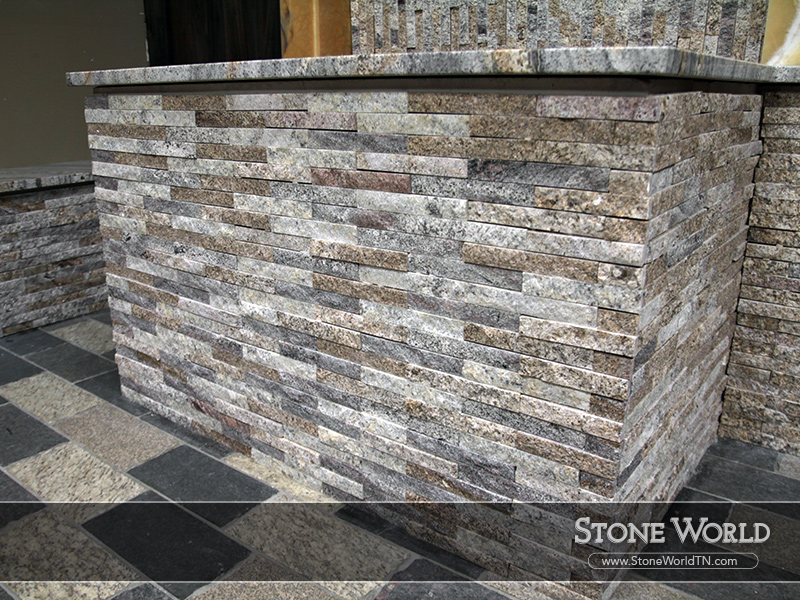 This is your standard straight edge for a countertop. It doesn’t require much in terms of upgrades, but it is sharp—which is something to keep in mind.

This is a granite edge that creates a completely curved edge, eliminating the potentially dangerous sharp corner of a flat edge. This leads to a smooth curved surface around the top and bottom edges of your countertops.

The radius edge looks a lot like the bullnose except the bottom edge is still flat. So, you get the smooth curve on the top and a straight edge on the bottom.

An eased edge essentially just ‘eases’ the edges of a flat cut—it’s not as rounded as a full bullnose and still maintains its rectangular edges, they are just slightly curved and eased out.

HOUSTON, Texas, and Woodlawn, Tenn. (Oct. 23, 2009) – Trina Scott and her three children got their first look today at the new home that Extreme Makeover: Home Edition and other volunteers built for them in Woodlawn, Tenn. The Scott family was nominated for the rebuild project by hundreds of supporters in their community.

Trina, 44, met her husband David while he was serving with the United States Army Special Forces in Fort Bragg – and it was love at first sight. After his discharge, David became a Clarksville police officer. In 2002, David and his partner were on-duty when their police car was violently struck by a truck. The car spun out of control, hit a guardrail, caught fire, and killed both David and his partner almost instantly. Overwhelmed with grief, Trina turned to a group called Concerns of Police Survivors, Inc. (C.O.P.S.), which helps the surviving family members of officers killed in the line of duty. Inspired by the help she received from C.O.P.S., Trina devoted all of her free time to the organization and became its president in 2003. The time that Trina dedicates to C.O.P.S. is essentially a full-time job, on top of the regular job she works to support her three daughters: Leyla, 17, Deidie, 13, and Alethea, 11. Trina has spent more than $20,000 to try to fix the mounting repairs to her small home, but the structural problems caused by termites and water damage remained.

“Cosentino and Silestone are thrilled to be a part of this Extreme Makeover: Home Edition project to help Trina and her kids have a new home that is comfortable, safe and spacious. Silestone countertop surfaces work very well because they fit with any design and color scheme. They are perfect for growing, active families like the Scotts because they are antimicrobial and are stain-, scratch- and scorch-resistant,” explained Lorenzo Marquez, vice president of marketing for Cosentino North America, which is headquartered in Houston, Texas.

Cosentino, with hands-on involvement from Stone World at the Scott family build site, has donated Silestone quartz kitchen and family room countertops, custom-fitting and installation services valued at approximately $20,000 as part of the construction and furnishing of the Montgomery family home. Cosentino has been working with Stone World for over five years.

Silestone tapped Stone World as its partner to fabricate and install Silestone countertops for this Extreme Makeover: Home Edition project. Silestone chose Stone World because of its high level of professionalism and demonstrated ability to perform the quick turnaround that is required for a project such as this one.

“Stone World is excited about the opportunity to work with Extreme Makeover: Home Edition and Silestone to help change the lives of a family in our neighborhood” commented Duan Coqui, manager at Stone World.

Silestone quartz is known for offering a cleaner and safer surface and for its built-in Microban® as well as its GREENGUARD certification for clean air quality and National Sanitation Foundation certification for food preparation – which represent extensive safety and environmental benefits to families like the Scotts. Silestone quartz also comes with a 15-year limited manufacturer’s warranty.

Interested in learning more about the warranties of our products?
View warranty information here.

BBB has determined that Stone World TN, Inc. meets BBB accreditation standards, which include a commitment to make a good faith effort to resolve any consumer complaints.

Stone World of Tennessee is proud to be the first granite fabrication facility to become a member of the Waste-to-Value “Greene Stone” Program. This program will enable us to recycle up to 90% of our waste, provide additional products to our customers, contribute to green building and add value to our customer’s homes.